Lime Beer you really cant go wrong if its hot outside with these two items but brewing with limes seems like it would be incredibly difficult but this company seems to have perfected its take on the combo.  Granted this is generally only available in the northern east cost (for now) definitely worth taking a sample of.

(Cape May, NJ) – Cape May Brewing Releases Tan Lime Beer dubbed Tan Limes, it is a Mexican lager with Persian lime juice and local sea salt, to their lineup of summer core offerings. Available throughout New Jersey, Pennsylvania, and Delaware, Tan Limes was originally conceived as a Tasting Room-only release for the brewery in 2019. 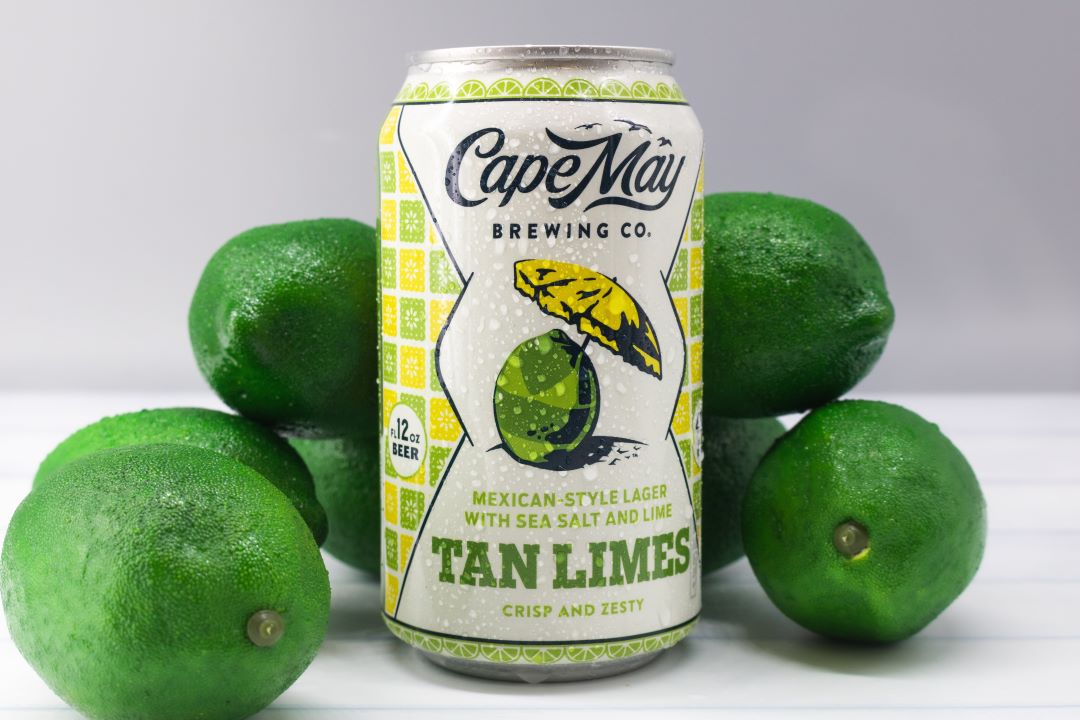 “Tan Limes has been a home run,” says Cape May Brewing Company CEO Ryan Krill. “When we released it on draft last April, the response was absolutely fantastic. Our loyal fans went wild, immediately asking us to package Tan Limes in cans. When we did, we couldn’t keep them on the shelves. It was obvious to all of us that Tan Limes deserved a bigger place in our lineup, and we couldn’t be happier to bring this refreshing and drinkable brew to taps and shelves throughout New Jersey, Pennsylvania, and Delaware.”

Brewed with a touch of locally-sourced sea salt and a hint of Persian lime juice, Tan Limes is a light and refreshing Mexican lager, fresh, zesty, and intensely drinkable.

It’s tangy and thirst-quenching, extremely crushable, and Lime Beer pairs well with a wide variety of food, says Cape May Brewing Company’s Innovation Director Brian Hink. “The lime and the sea salt take center stage, the hops are barely perceptible, and the malt bill is completely out of the way. This beer is ridiculously drinkable.”

The scaled-up version of Tan Limes will replace the 12-ounce cans of Cape May Brewing Company’s Belgian Strong Ale, Devil’s Reach, throughout the spring and summer months.

“We noticed a dip in sales of canned Devil’s Reach over the summer,” says Cape May Brewing Company’s Director of Sales, Bill Zaninelli. “Devil’s Reach is a great beer and has long been a mainstay of our core lineup, but, with an ABV of 8.6%, it’s not exactly a lawnmower beer.”

However, as many on-premise accounts have Devil’s Reach as part of their draft lineup, it will still be available on draft throughout the spring and summer months.

“So, we made the decision to keep Devil’s on draft year-round,” Zaninelli says, “but only package it in cans in the fall and winter. This way, our long-time draft accounts are happy, and we have room in the schedule for a light, simple brew for the warmer months.”

Originally released as a draft-only offering in April of 2019, Cape May Brewing Company followed this successful release with a 16-ounce canned run, available only in their Tasting Room at 1288 Hornet Road in the Cape May Airport. The 12-ounce canned release required a redesign of the packaging, with the design team deciding upon the image of a lime sunning herself on the beaches of Cape May.

“I absolutely love this can design,” says Cape May Brewing Company’s Director of Marketing Alicia Grasso. “The straightforward image conveys everything you need to know about this beer: it’s simple, it’s refreshing, and it’s definitely what you’d want to drink during a day on the beach, working on your tan lines.”

For more information on Cape May Brewing Company, including their complete lineup of core brands, seasonals, limited-edition, and specialty brews, call (609) 849-9933 or see their website at www.capemaybrewery.com.

Montavilla Brew Works (MBW) has announced a long-awaited can lineup.

Montavilla Brew Works (MBW) has announced a long-awaited can lineup.